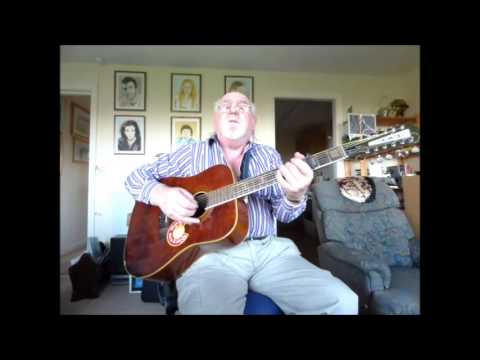 100 years ago today, during WWI, an unofficial truce occurred all along the Western Front.
Thanks to Mudcat.org, I have been introduced to this song written by Cormac MacConnell and have worked out an accompaniment of my own from a video of the song linked to the thread in Mudcat.

G
In the year 1914 on Christmas Day,
D7
On the Western front the guns all died away.
C G
And lying in the mud on bags of sand
Am D7
We heard the German sing from No Man’s Land.
G
He had a tenor voice so clear and true;
D7
The words were strange, but every note we knew.
C Em7
Soaring o’er the living, dead and damned,
Am D7 G
That soldier sang of peace from No Man’s Land.

G
Oh, Silent night, no cannons roar.
D7
A King is born of peace for ever more,
C Em7
All’s calm, all’s bright, all brothers hand in hand,
Am D7 G
A Soldier’s song of peace from No Man’s Land.

They slowly left their trenches, we left ours.
Beneath tin hats the smiles bloomed like wild flowers.
With photos, cigarettes and flasks of wine,
We made a soldier’s peace on that front line.
Their singer was a lad of twenty-one;
We begged another song before the dawn,
And sitting amid carnage, death and fear,
He sang again the song all longed to hear.

In the morning all the guns roared in the rain,
And they killed us and we killed them again
With bayonet, bomb and bullet, gas and flame
And neither them nor us at at all to blame.
There was heavy fighting all throughout that day.
For one night’s peace we bitterly did pay.
That night they charged, we fought them hand to hand
And I shot the lad who sang from No Man’s Land.

Oh, Silent night, no cannons roar,
A king is born of peace for ever more.
All’s calm, all’s bright, all brothers hand in hand,
A soldier’s song of peace from No Man’s Land.
O Silent night, Holy night,
And his ghostly voice still rings
As the young dead soldier sings
Where the Captains and the Kings built No Man’s Land.

The following is an article that was printed in a Manx newspaper, (Isle of Man Times, I think), dated 13th January 1915:

CHRISTMAS TRUCE IN THE TRENCHES

A Douglas lady has received the following interesting letter from her brother, who is at present serving with the 1st Royal Fusiliers in the trenches:-

“I know you like to have news firsthand, so I am going to just let you know how we spent Christmas. Well on Christmas Eve, the Germans stopped firing, and our chaps did the same. No firing was done that night, and on Xmas Day our chaps, ready for sport, went over to the Germans and shook hands with them. We exchanged beer and cigarettes for wine and cigars, and one of the Germans cut off all his buttons and gave them to one of our men in exchange for a pair of putties. Then we took a football over, and we were just going to play them a match when along came one of their fussy officers, three parts drunk, and raised Cain. He went off shocking, and ordered them back again; so we played ourselves, and they watched us and cheered. This is the truth, but as soon as 12 o’clock came, we started to fight again. – Ted.”